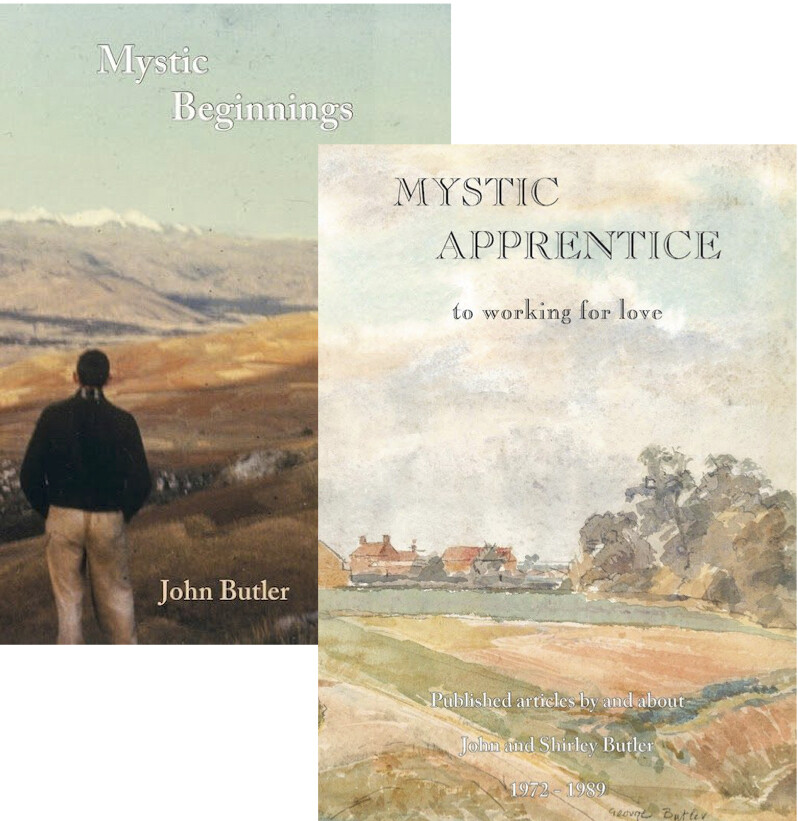 Mystic Apprentice/Mystic Beginnings (2 volumes - save £2 when ordered together)

Mystic Apprentice
to working for love

As a very small child, John used to say, “I came into this world to be a farmer.” He never doubted it. For him it was always a labour of love. Well taught that, ‘A good farmer leaves the land better than he found it’ - he saw himself as servant, not master of his farm. When, gradually, through a long life of many trials, farming expanded to embrace the world, and physical gave way to spirit, he continued his devotion with the work of prayer.

Was it purely coincidental that his life foreshadowed the developing organic movement, with its re-awakening sense of reverence for Mother Earth? Beside regular articles, he wrote many notes, which best striking witness to his work and leave material for a substantial Legacy of books. More recently he has also made a huge impact with videos on YouTube ‘Spiritual Unfoldment’. Now, people call him a pioneer …

This scrapbook reproduces published articles by and about John and his wife, Shirley, written during their farming years between 1972 and 1989. It is intended to accompany his book ‘Mystic Beginnings’.

‘I’ll have no bond, no loyalty to any body save only the free spirit’

How can one live unfenced and free within limits of human existence? Or satisfy love’s insatiable need in a world of ‘Yes’ and ‘No’? Describing the long, slow development of spiritual awareness, ‘Mystic Beginnings’ leads the reader through John Butler’s boyhood and army days … to wide, open spaces in Australia, farming, injury and business … bursting out to ‘Make the world a better place’ and, chastened, to return … back to farming, meditation, first stormy days of marriage and, then, in 1984, at the age of 47 – to see a woman as he’d never seen before …

This book was written soon afterwards in an attempt to understand.

Save this product for later
Display prices in: GBP